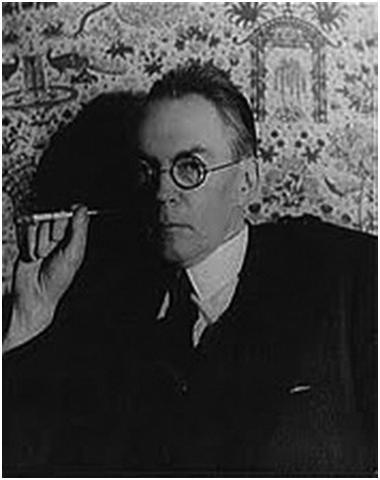 James Branch Cabell was the author of fifty-two books, including fantasy and science fiction novels, comedies of manners about postbellum Richmond, works of genealogy, collections of short stories, essays, and poetry. His best-known book, Jurgen, A Comedy of Justice (1919), is about an eponymous hero who travels to heaven, hell, and beyond, seducing women and even the devil's wife. Denounced by the New York Society for the Suppression of Vice, it became the subject of a landmark, two-year obscenity case following its publication. The novel eventually was deemed fit to read, and its subsequent popularity propelled Cabell to literary fame. His most comprehensive project, however, is the sprawling, eighteenvolume collection known as the Biography of the Life of Manuel (1927 - 1930), of which Jurgen is a part. Comprised of novels, essays, and poetry, it traces the life of Manuel, Count of Poictesme (a fictional French province, pronounced “pwa-tem”), and generations of his descendants. While some of Cabell’s novels— especially those that are science fiction and fantasy—have achieved cult status, his work fell out of favor beginning in the 1930s. By the time of his death in 1958, he was known primarily as the author of the scandalous Jurgen.

Cabell was born on April 14, 1879, in Richmond, the son of Robert Gamble Cabell, a physician who was then assistant superintendent of the Central Lunatic Asylum in Petersburg, and Anne Harris Branch Cabell, the beautiful and headstrong daughter of James Read Branch and granddaughter of Thomas Branch, both prominent investment bankers. His paternal greatgrandfather, William H. Cabell, served as governor of Virginia from 1805 until 1808.

For a conservative southern gentleman, Cabell led a life curiously marked by scandal. He enrolled in 1894 at the College of William and Mary in Williamsburg, and during a distinguished undergraduate career, he was engaged by the college while an upperclassman to teach undergraduates French and Greek. His reputation, however, was nearly destroyed by a false rumor that he had participated in a homosexual orgy involving the college librarian and a few other members of Cabell’s fraternity. This weirdly hysterical piece of campus gossip led to his temporary withdrawal from the college and his abandonment of his courtship of Gabriella Moncure, a young woman whose beguiling unattainability later haunted his novels as Dorothy in Jurgen (1919) and Melior in The High Place (1923).

After graduating in June 1898, Cabell worked briefly as a reporter in New York City. On his return to Richmond, he again found himself the subject of a malicious rumor, that he had murdered a cousin with whom his mother was allegedly having an affair. Although the victim’s family conducted an investigation that revealed the identities of the real killers, the truth about the murder, which for various reasons would have sullied the family’s name, was allowed to remain obscure, and Cabell spent the rest of his life dogged by innuendos and shady allegations.

A shy, somewhat cool young man with literary ambitions, Cabell found refuge in genealogy. Aided by Branch money, he spent much of his young adulthood researching the family pedigree, an employment that allowed him to travel in France and the British Isles and eventually enabled him to improve his mother’s social standing in Virginia. Cabell published the first results of his research in Branchiana: Being a Partial Account of the Branch Family in Virginia (1907). On November 8, 1913, he married Rebecca Priscilla Bradley Shepherd, a widow with five children. They had one son, Ballard Hartwell Cabell, who was born on August 25, 1915.

In the meantime Cabell’s short stories were being published in such fashionable periodicals as the Smart Set and Harper's Monthly Magazine. His first novel, The Eagle's Shadow, a drawingroom comedy reminiscent of the plays of William Congreve, appeared in 1904. In the next few years, Cabell published several books with different presses, including The Cords of Vanity (1909), Chivalry (1909), The Soul of Melicent (1913; reissued as Domnei in 1920), and The Rivet in Grandfather's Neck (1915). These early works tended to be comedies of manners, but he was also drawn to the popular medievalism of the day, best represented by A Connecticut Yankee in King Arthur’s Court and When Knighthood Was in Flower. Howard Pyle illustrated some of Cabell’s works, but his novels sold poorly, and successive publishers dropped him.

Guy Holt, Cabell’s friend and editor at the publishing house Robert M. McBride and Company, which published The Rivet in Grandfather's Neck, enthusiastically supported Cabell’s maturing efforts. The Cream of the Jest (1917), one of Cabell’s best and most important works, was the first to draw serious critical attention. Burton Rascoe, of the Chicago Tribune, and H. L. Mencken praised the work and became Cabell’s ardent champions.

In 1919 Cabell published Beyond Life, a kind of formalist credo in which he first launched his lifelong attack on literary realism. His ideas apparently struck the right note at a time when American writers were striving to replace the genteel tradition with a new literary sophistication and daring. Cabell found himself at the center of a literary circle bearing his name and including such prominent writers as the young F. Scott Fitzgerald, Joseph Hergesheimer, Carl Van Vechten, and Elinor Wylie.

Cabell gained his greatest notoriety in 1919 with the publication of Jurgen a novel that evolved out of a story originally published in the Smart Set. In a coy, suggestive narrative, the eponymous hero of Jurgen —a medieval pawnbroker who considers himself to be a “monstrous clever fellow”—sails through a series of sexual liaisons with a female vampire, a fertility goddess, and Arthurian maidens before ultimately reaffirming to himself the sanity of domestic, wedded harmony. Many people missed the moral of the story, however, and the director of the New York Society for the Suppression of Vice charged that the novel was obscene and quickly had the printing plates seized and the book banned. Overnight Jurgen became a cause célèbre, lifting Cabell from obscurity to fame as one of America’s most-discussed novelists. After the obscenity trial resulted in acquittal in October 1922, Jurgen became a best seller and its author became a cult idol for a generation desperate to transcend American provincialism and attain a new continental knowingness in matters of literature and sex.

Cabell’s next novels, such as The High Place (1923), The Silver Stallion (1926), and Something about Eve (1927), enjoyed critical and commercial success. Incorporating these titles and revised versions of some earlier works into an eighteen-volume set titled Biography of the Life of Manuel (1927-1930), he created an entire fictional world called Poictesme, with its own local legends, first families, customs, and peculiarities, a world very much like Cabell’s Virginia. The Biography is replete with genealogical and cartographical guides to its invented history and terrain. It traces the descendants of Manuel, a medieval swineherd who becomes the ruler of Poictesme, from humble French beginnings through the court intrigues of the seventeenth-century ancien régime, continuing into the English Enlightenment, and concluding in twentieth-century Virginia.

The multivolume design of the Biography created a formal unity crucial to Cabell’s sense of literary aesthetics and provided an important, though inadequately acknowledged, influence on southern fiction that can be seen in such cumulations as Ellen Glasgow’s Virginia Edition and William Faulkner’s Yoknapatawpha novels. To distinguish the Biography from his later works, Cabell published under the truncated name Branch Cabell from 1932 through 1946. In Let Me Lie: Being in the Main an Ethnological Account of the Remarkable Commonwealth of Virginia and the Making of Its History (1947), he reverted to his full name.

Cabell’s aestheticism eventually worked against him. The intellectual climate turned decidedly toward left-wing radicalism during the 1930s, and he was subjected to brutal criticism. The irony is that, far from being a snob, Cabell had always pursued popular success, and he frequently expressed disdain for such avant-garde novelists as Faulkner and James Joyce. His own critical taste ran to odd choices, such as Marjorie Kinnan Rawlings and Booth Tarkington. Cabell enjoyed the acclaim that Jurgen brought and reveled in his celebrity and fame. The body of his work, if carefully considered, reveals a writer who was deeply committed to literature as a positive social force. Still his readers seem to have been influenced by the harsh judgment of his critics and eventually viewed his cool aestheticism with disfavor.

Cabell and his wife were both active in Virginia’s patriotic societies, and she was among the first women to work for the preservation of the state’s historic records. He was a genealogist for the Sons of the American Revolution and a member of the First Families of Virginia, the Society of the Cincinnati, and the fraternities Phi Beta Kappa and Kappa Alpha. During the 1920s Cabell served as historian for the Society of Colonial Wars in the State of Virginia and as an editor for the Virginia War History Commission, which published records and accounts of Virginians’ participation in World War I (1914–1918). Such credentials did little to boost his fame in the 1930s. As his distant, patrician image began to work against him, Cabell’s popularity dwindled, as did the sales of his books. Yet he continued to write with no apparent bitterness.

Although never recovering his former success, he added some impressive works to his canon, particularly The Nightmare Has Triplets (1934–1937), a trilogy with Joycean echoes, and The First Gentleman of America (1942), a novel set in Spanish Florida. From 1932 through 1935, Cabell served as an editor of the American Spectator, a short-lived literary newspaper whose other contributing editors included Sherwood Anderson, Theodore Dreiser, Eugene O’Neill, and Louis Untermeyer.

After 1935 Cabell resided in relative obscurity in Richmond and spent vacations in Saint Augustine, Florida. His wife died on March 29, 1949, and on June 15, 1950, in a civil ceremony (followed by a church ceremony two days later), Cabell married Margaret Waller Freeman, who had been an editor of The Reviewer, the acclaimed Richmond journal in the 1920s when Cabell, Hergesheimer, and Mencken were all associated with it. Cabell’s reputation languished until the eminent critic Edmund Wilson published “The James Branch Cabell Case Reopened” in the April 21, 1956, issue of the The New Yorker. He regarded Cabell as an important representative of the southern literary tradition and pleaded for a serious reappraisal of his accomplishments. A sounding call for a Cabell revival, Wilson’s essay did not win over critics or readers. Joe Lee Davis published a critical retrospective of Cabell’s career in 1962 and thereafter several journals and newsletters devoted to him, such as Kalki, which thrived briefly but then perished. Two editions of Cabell’s letters were published after his death, and on the centennial of his birth, a volume of favorable critical essays edited by M. Thomas Inga and Edgar E. MacDonald appeared, but they led to little renewed interest in his writings.

Cabell’s fame, always close to moribund, has never quite died. Some of his novels enjoy a cult status in the science fiction and fantasy field, and in the latter decades of the twentieth century, some critics attempted to reassess him in the light of postmodernism by exploring his work as a precursor to the fantastic satire of the 1960s and 1970s. Yet Cabell’s aristocratic lineage and his undeserved reputation for aloofness and elitism took their critical toll. He has been remembered most often in association with Mencken, his primary champion, and Glasgow, his friend and fellow Richmonder, or as he had predicted and as the headline of his New York Times obituary identified him, simply as the author of Jurgen.

Cabell’s personal book collection is preserved in the library named for him at Virginia Commonwealth University in Richmond. He lived his last years in seclusion following a heart attack and a minor stroke. James Branch Cabell died of a cerebral hemorrhage at his home in Richmond on May 5, 1958, and was buried in the graveyard of Emmanuel Episcopal Church in Henrico County. In 1959 the remains of Cabell and his first wife were reinterred in Hollywood Cemetery in Richmond.