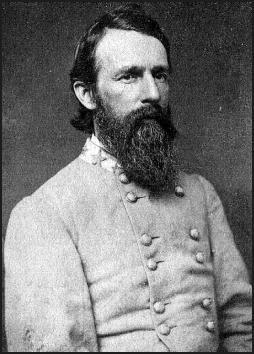 Brigadier General James J. Archer was born in Harford County, Maryland, to a distinguished family that has contributed brave soldiers to American battles. After serving on frontier duty in the West, he was promoted to first lieutenant in October 1833. He resigned on March 31, 1834, and was engaged in business as a lumber merchant at Havre-deGrace, Maryland, until 1847, and from that date until 1861 as a planter in San Patricio, Tex. He was commissioned a captain in the regular army of the Confederate States on March 16, 1861. Soon afterward, with the rank of colonel of the Fifth Texas regiment, he took command of the Texas brigade at the Evansport batteries.

In May, as acting brigadier general, he was on duty at West Point, Virginia, and after the battle of Seven Pines, he was promoted brigadier general and assigned to the command of a brigade in A. P. Hill’s division, consisting mainly of Tennessee and Alabama regiments. Under his gallant leadership, Archer’s brigade soon rose to prominence in the famous “light division” and won laurels through all the hard fighting that followed.

On June 26 in the battle of Mechanicsville, he advanced along the Bethesda road and made a desperate attack upon the federal position with such valor that the losses of the attack fell principally upon his brigade. Following the retreating enemy, he was again engaged with distinction at Gaines’ Mill. With Jackson’s command in the campaign of Manassas that followed, he was in action at Cedar Mountain on August 9, Manassas Junction on August 26, and in the battles of Manassas on August 28, 29, and 30. On the 29th, according to General Lee’s report, General Archer “firmly held his ground against every attack.”

He was subsequently in action at Ox Hill, during the Maryland campaign took part in the capture of Harpers Ferry and the battle of Sharpsburg during the Maryland campaign, and the encounter of Shepherdstown; and in the following December, he was in the heat of the fighting at Fredericksburg. He participated in the flank movement and hard fighting of Jackson’s corps at Chancellorsville.

At Gettysburg, with Hill having been promoted to command the corps, General Archer’s brigade was in the division commanded by General Henry Heth, which led in the Confederate advance on Gettysburg, Archer’s command on the right of division line. The first shot of this memorable struggle was fired by Archer’s brigade, and the first Confederate who fell was a private in one of his Tennessee regiments. The brigade occupied McPherson’s Woods, against which the Federal troops were promptly hurled under the leadership of Major-General Reynolds himself. In the fight that followed, Reynolds was killed; Archer was wounded and, with many of his command, fell into the hands of the enemy. The service lost at this time, as General Early well expressed it, a “most gallant and meritorious officer.”

In the summer of 1864, Archer was one of the six hundred Confederate officers who were sent from Fort Delaware to be placed under fire at Morris Island. Subsequently exchanged, he was assigned on August 19, 1864, to the command of his brigade and Walker’s, temporarily united, of Heth’s division. But in a few weeks, the effects of his wounds and the hardships of imprisonment disabled him for active duty and caused his death on October 24, 1864.